Considering we are covered in snow and average around 8-9 hours of sunlight per day throughout the winter months it is fair to wonder about the viability of using solar as a renewable energy source here in the north. Fortunately, solar is in fact an excellent option for us northerners!

Though solar panels are generally thought of as a warm-weather technology, they actually perform better in the cold.

While the modules are able to produce usable energy at a more efficient rate, some inverters will be affected by extreme temperatures. Solvest has lots of experience installing in the north, and we take great care to properly insulate and protect equipment against these cold temperatures.

What About the Lack Of Sunlight During The Winter?

Of course, there is still the issue of minimal sunlight exposure throughout the winter; lower performance outputs will occur in the winter due to decreased daily sunlight hours.

At Solvest, we take strides to ensure this is reflected in all of our modeling and forecasts so that our clients are making decisions based on conservative production estimates: 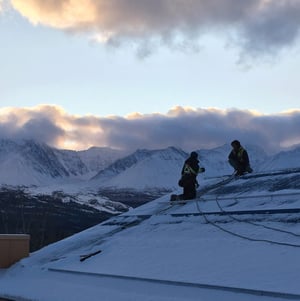 In addition to minimal daylight, lower performance outputs in the winter are also due to snowfall.

A benefit of having a ground-mounted system is accessibility, allowing you to brush snow off your panels for some winter production, although it is still minimal compared to the summer season.


On roof-mounted systems that are not as easily cleared, snow still only causes a minor amount of lost production. For most roof-mounted solar installations it is not worthwhile to do any snow removal; Solvest does not recommend that clients get on their roofs to attempt snow removal.

For accessible roofs (single-story, balcony access, low pitch), snow can be easily pushed off the panels with a long brush. However, clearing the snow from a low to medium-pitch roof would only result in 1% - 5% more annual production depending on the tilt, azimuth, and shading factors of the solar array.

The risk is too high relative to the gained production to make this worthwhile for most system owners.

Once again, snow-covered panels are accounted for in every proposal we do for our northern clients...

How exactly does Solvest account for the lost production due to snow in their modeling?

Solvest takes snow losses into account when modeling roof-mounted solar systems when preparing all the figures included in your proposal. When modeling your system, we assume the following snow loss factors:

In turn, the financial estimates in our proposals are calculated with local conditions in mind, allowing our clients to make informed decisions and budgets accurately.

For ground-mounted solar arrays, it is assumed that occasional snow clearing is done by the system owner during the months of October, February, and March. Because of the increased tilt of the ground racking, it is easier to clear snow and the panels can better collect sunlight at lower winter angles.

Should you be left with any unanswered questions after reading this, please reach out to our team by filling out the contact form below!

Talk to your northern solar experts

Have a question about solar or Solvest that wasn't answered in our blog? Send us a message!